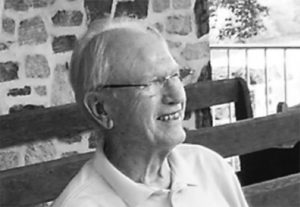 Marshall O. Sutton, author of Gunpowder Friends Meeting, Sparks, Maryland: A Brief History, died Nov 17, 2017 at the age of 99.  He had witnessed and contributed to Gunpowder Meeting’s sustained revival, its spiritual and personal hospitality, its intentional ministries to its own members and attenders, and the resulting support for individuals’ leadings both contemplative and active.  Marshall’s life was one of curiosity, spiritual depth, and service, as described more detail in the Memorial Minute that is part of Gunpowder Meeting’s permanent records.  Marshall was the first director of Catoctin Quaker camp, and – as part of his conscientious objector status prior to and during WWII – one of only 40 participants in a landmark study (Minnesota Starvation Experiment) that saved lives of war survivors recovering from starvation, an experience that simultaneously transformed Marshall’s own life.  Typical of Gunpowder’s elders, Marshall “leaned in” to social changes wrought by the divine Light of continuing revelation, including the Meeting’s decision to support same-gender marriages (a discernment left in suspense in 1st Edition).  Three weeks before his death, his body failing, Marshall observed, “God is the very presence of life. … it’s such a pleasure to be in the world, and feel the joy of being present in the world.”  Asked if he had any message to convey to Friends at Gunpowder Meeting, he offered, “Be attentive to going to Meeting and preparing yourself for Meeting.”  Then he added, “I miss being out on the porch [where Meetings occur in summer].  I miss watching the birds fly around.”