Because Friends search together to find unity in our decision-making process, we value deeply those decisions that we are led to by Spirit. We approve and record all corporate decisions made by the Meeting as Minutes.

We use the same term, Minute, to record and affirm commitments made by individuals or groups. When approved by the gathered body in Meeting for Business, these statements can then be brought to other Quaker organizations for discernment, or shared in the wider world as part of Gunpowder’s social action. 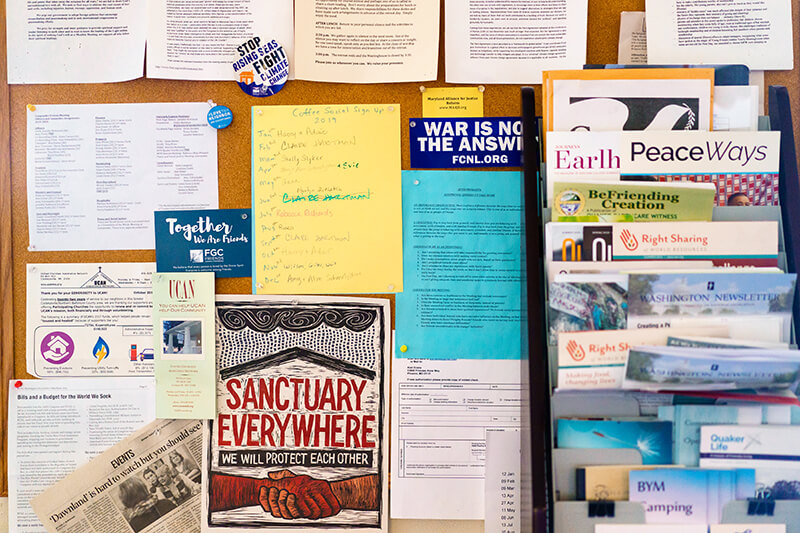 Baltimore Yearly Meeting of the Religious Society of Friends (Quakers) rejoices in the presence of transgender people in our midst including non-binary people.  Our transgender members enrich our community and deepen our worship.  We believe that there is that of God in everyone and everyone has gifts to bring to the world.  Whenever anyone is excluded, God’s ability to work in our midst is diminished.

We commit ourselves to support transgender people in our meetings and the civil and human rights of our transgender members and all transgender people.  We also commit to enlarging our understanding of the experience of being transgender.  No one should face discrimination in employment, housing, health care, or otherwise, or have their dignity assaulted and their human rights curtailed because of their gender identity.

The Poor People’s Campaign is a national call for moral revival, uniting people across the country to challenge the evils of systemic racism, poverty, the war economy, ecological devastation and the nation’s distorted morality.

More information is available at www.poorpeoplescampaign.org

Gunpowder Meeting endorsed the Back from the Brink Campaign, a national campaign originated by Physicians for Social Responsibility and endorsed by national organizations, including American Friends Service Committee (AFSC) and Friends Committee on National Legislation (FCNL).

The campaign’s plan includes five elements and states the following:  We call the United States to lead a global effort to prevent nuclear war by:

More information is available at www.preventnuclearwar.org.

Gunpowder Meeting endorsed the work of the Maryland Alliance for Justice Reform (MAJR), and approved the Meeting’s support of MAJR’s legislative work in the Maryland Legislature.  MAJR grew from Annapolis Friends Meeting after their reading of the New Jim Crow and has become a statewide organization.

The practice of hydraulic fracturing (fracking) to extract natural gas from deep below the earth’s surface is inconsistent with our understanding of right relationship with Nature. Fracking disrupts the environment by using disproportionate amounts of our precious water resources, by contaminating that water with proprietary chemicals that are not subject to rigorous scientific safety studies, and by expanding our reliance on fossil fuels. Because fracking involves both vertical and extensive horizontal drilling, it stresses the environment far beyond the immediate drilling site. Because it extends our reliance on fossil fuels, it accelerates the release of hydrocarbons into the atmosphere, where the consequences of human activity contribute to imbalance, climate change, and possible squandering of Nature’s bounty.

Fracking in the Marcellus Shale fields of our neighboring states of Pennsylvania and West Virginia has led to reports of destruction of ecologically sensitive ecosystems and contamination of streams and drinking wells, reports we find too credible to dismiss in the name of expediency and short-term rewards. We have the opportunity to act now in the State of Maryland to prevent fracking rather than to clean up environmental damage later and deepen our dependence on fossil fuels. We encourage the further exploration and development of alternative and sustainable sources of energy. We ask that the government wait to approve any new fracking until a full Environmental Protection Agency (EPA) study on the matter is concluded. We seek a pause and slow reversal of our patterns of unsustainable exploitation and reshaping of planet Earth. This will not be easy in state, national, or international terms, as it requires vision beyond ourselves and our generation. Yet, the choice is clear enough, and where data remain uncertain, we favor a prudent expectation that the resiliency of Nature as we know it is not limitless. We urge an assumption of individual, collective, and governmental responsibility to bring our energy consumption in better alignment with available resources. We seek a right relationship with Nature.

Over the past decade, our Meeting community has engaged in worship, deep listening, learning, and sharing of our experiences on same gender marriage. Members of the Ministry and Counsel committee have held several prayerful meetings this summer to reflect on what we have heard from the Meeting community during these years of discernment. We discern that the Sense of our Meeting is that we are now ready, as a community, to support the marriage of same gender couples. We will honor the traditional processes for clearness and oversight of the marriage of all couples who wish to be married under the care of our Meeting.